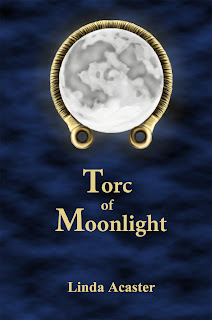 TORC OF MOONLIGHT explores the controlling influences of current and past relationships: person to person, person to place, the past to the present.

Nick Blaketon came to the University of Hull to play rugby, drink beer and get laid. Now into his second year, none of it is going right for him. Alice Linwood escaped a claustrophobic home-life full of unresolved trauma, only to bury herself in restrictive research so as to uncover the shrine of a forgotten Celtic water goddess. To Celtic Briton Ognirius Licinius Vranaun, who betrayed his name, his ancestry and his people's religion for the trappings of a Roman lifestyle at Derventio (Malton), the goddess of the pool is not forgotten, nor forgiven. Is this why universities surround the North York Moors as once did mediaeval seats of learning? Why does tutor Leonard Harkin continue to search for his soulmate, despite his reputation among female students and warnings to leave from his estranged partner? Nick takes none of Alice's theories seriously - until the trees crowd in and he realises that his training regime is not to hone his rugby skills.

Author's Note:
The places in TORC OF MOONLIGHT are real and are described as true as fiction allows. The county of Yorkshire, once home to the Celtic Parisi and Gabrovantices, has more ancient springs known enigmatically as Lady Well than anywhere in England.


Excerpt:
Alice dipped her fingers in the beaker. ‘Most often the water from these springs was used medicinally for joint problems, eye ailments, that sort of thing.’
Her hand reached for Nick’s face. Water dribbled down his torn cheek, first paralysing the scar tissue and then searing it with heat. Icy fingertips painted lines across his forehead and over one eye, following his facial injury. Nick leaned into her delicate touch, his breathing growing shallow, his gaze intent on her face, tracing caresses of his own. Her auburn hair was lost to the rock’s leaching colour, her pale eyes to the silver cascade.
‘Will... Will it heal bruises?’
‘I’m hoping so.’
With trembling hands he reached for the buttons of his shirt. Alice’s calm expression changed to one of dismay as his chest and ribs were freed of the garment. The beaker slipped in her hand, spilling the last of the water.
‘Nick... Nick, what happened to you?’
He didn’t want to explain. He wanted only for her to touch him with her ice-bound fingertips, anoint him with the fire-filled water.
‘Why didn’t you say? Nick, you must be in awful pain.’
The only pain he felt was an ache within his soul that only she could soothe. He dropped to his knees, reaching out a hand to lift water from the shallows. The cold clamped about his wrist, striking up his forearm in an attempt to drag him further in. The temptation to submit was strong, but he resisted, lifting his numbed hand to Alice’s face to smooth away her frown.
‘I’m not hurt,’ she murmured.
‘Yes you are, I know you are.’
Heat lit in his fingers as he touched her skin. It built to a fire along his knuckles and in his palm as he traced her cheekbone and her chin, easing to a tingling as the paralysis faded and his fingers caressed down her throat and over her collarbone.
She dipped between his reaching hands to rise again, and his body shuddered beneath the onslaught of liquid ice as it cut over his shoulders and down his back, over his shoulders and down his chest, the anaesthetizing cold penetrating each aching muscle, each bruised rib. In its wake the fire came, scorching impressions of her fingers into his flesh, and into his desire.
As his mouth sought hers, her name eased from his throat, a sibilant invocation, and he fed his fingers through her auburn hair and inside the neckline of her top to ease it from her shoulders.

Hey, Linda! Thanks very much for having me on your blog today. I've just got in from a "mercy" dash to my mother's in our nearby city so have only just got logged on and seen it.

If anyone looking wants to ask questions, please do. I'll be around for the rest of the day!

Hi to both Lindas!

I've read TORC OF MOONLIGHT and I really enjoyed it. I loved the northern slant on the ancient history and the sense of place throughout the novel.

Linda A - do your foresee setting other novels in this region?

Ah, long story! Originally "Torc of Moonlight" was a stand-alone, but while explaining to a foreign visitor in the crypt of York Minster why we Brits throw coins into any pool of water, I had the sort of visitation by the muse that every writer dreams of. And the follow-up novel dropped into my arms almost in its entirety.

And so the short answer is - you bet!

Great excerpt. I like the subtle sensuality. What a nice title, Linda.

Thanks Mona. I really can't be doing with graphic full-on sex. It isn't sexy as far as I am concerned.

Someone who read the novel before it was published looked at me quite shocked when we were discussing the 'love' and 'sex' scenes; the novel is, after all, about the resurrection of a fertility goddess, so if readers are expecting recipes for jam doughnuts they'll be in for an interesting time.

Of course not; the reader's imagination is, or should be, far more potent than I can deliver. I just point them in the right direction, so to speak (ahem...) I strongly believe that reading is not a passive exercise.

If you call into www.lindaacaster.co.uk (or .com) you'll find the opening sequence as an excerpt.

Thanks for calling by.