Winner of the Christmas Award

I AM DELIGHTED TO ANNOUNCE THAT THE WINNER OF THE CHRISTMAS AWARD IS:
MC HALIDAY FOR
I CAME UPSTAIRS
PUBLISHER ETERNAL PRESS

CONGRATULATIONS MARIE. YOUR BOOK WAS A CLEAR WINNER.
WE WISH YOU GOOD LUCK FOR THE FUTURE
Posted by Anne Herries Author at 09:01 No comments: 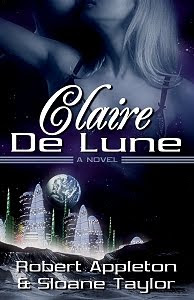 Lucky us! Look who is here today folks.


Today I have two of my favourite authors here at the site to tell you about a book they have written together. Individually they have strong voices that are instantly recognisable and both are good on plots. I think this is going to be a fabulous book.

Read it and see if you agree.

Cocky young detectives Gerry Rappeneau and Sebastian Thorpe-Campbell arrive at the premier lunar resort expecting a week of eye candy and long massages. With a half-billion-credit purse up for grabs, this year’s pageant is the focus of a hundred worlds. And beauty isn’t the only thing in the eye of the beholder.

One contestant, Evelyn Lyons, is attacked and her assailant killed. Surely a simple case of a stalker gone mad, as nothing bad ever happens at the Selene contest. So the brochure says.

The closer Gerry gets to Evelyn, the more he is convinced she’s hiding something. His meticulous character sparks with her wild, sassy nature, and they embark on a torrid affair. Their forbidden romance isn’t the only thing set to ignite in Pont de Reves.

Sebastian’s infatuation with demure Claire Villiers, another contestant, threatens to put all four of them in harm’s way.

EXCERPT:
Gerry raised his hand, then dropped it back to his side. Nervous as a teenager on his first date, he scrubbed his sweaty palms down his pant legs. A few deep breaths proved another fruitless attempt to calm himself. He stood straighter, ignoring the giggles from farther up the corridor, and cleared his throat. A few ahems later, he managed to find the balls to knock on Evelyn’s door.

His pulse quickened at the click of a switch inside the room. A trace of exotic perfume. The jingle of a purse chain. All familiar, but never old: the details preceding a first date.

“Hey, thanks for being on time.”

Her greeting wasn’t the most romantic he’d experienced, but, Christ alive, her dress more than made up for it. A deep purple Aeon evening number, off-shoulder, the kind all the hottest policewomen wore to the annual ICLA social on Io.

He’d…um…encountered it before on a few occasions, but never on such mouth-watering curves. When she turned to lock the door, her pert ass and shapely hips, accentuated by a waist-hugging belt, roused his dick to Mach 9.

She wheeled around and flashed him a hungry glance. Her red lipstick, dark eyeliner, and blonde hair tied back, exposing her swan-like neck, conspired to steal his breath.

“You look lovely,” he whispered, ashamed it was the best he could manage without panting like a Labrador in heat.

“Thank you. Love that shirt.” She spun too quickly and almost clashed heads with him, before dropping her keycard into her purse and wrapping the chain around her wrist. She offered him her free arm and added, “Shall we?”

The touch of her soft white skin on his bare arm ghosted him for a moment as they walked to the elevator. He noticed her lip quiver—the girl inside the goddess—and it settled him into his old confident self. Charming, some might say. At the very least, a smoother groove from which to guide the evening.

“Where are we going?” she asked. “Not too far, I hope. We’re supposed to adhere to a strict curfew.”

“Farther than you’ve ever dreamed.”

“Goody. Rules are for wimps anyway. And you are my official bodyguard.” She squeezed his arm to her supple body, her soft breast pressing into him. “Is it expensive? Not that you should spend the Earth on me or anything, but—”

At the elevator, he held the door open and gestured for her to go first. He then followed and pressed the button for the tenth floor. They were alone in the small space, which seemed to shrink as they climbed higher. He watched her reflection in the mirrored wall while inhaling the full body of her delicate honey scent. Delicious. He swallowed hard, mustering all his strength not to wrap her in his arms and kiss her senseless.

The doors pinged open and he led her across a beige carpet and into an elegant tunnel. Pastel murals of strange, exotic landscapes, encompassing all colors, morphed and blended into one another in a rolling three-sixty display that dizzied as much as it dazzled. Evelyn appeared fascinated as she brushed her hand in front of the imagery, wanting to touch those wild alien locales.

Gerry grinned to himself. So far, so good. If she liked this swirling intro, she’d flip for the full service.

It was great to have you here Rob and Sloane.

I can recommend Rob for his wonderful mystic creatures and thrilling descriptions. No one does Sensual better than Sloane Taylor.

Read this sizzling book for Christmas. Go on, treat yourselves. I'm going to.

All the best to everyone, Linda
Posted by Anne Herries Author at 01:05 2 comments: